The label of “earlier adult works” is a little fuzzy, but it seems appropriate here.  Some clarifications might be in order, though:

First, of course, adult here is not a euphemism for works of erotica, but instead simply the literal term for novels written for readers over 18 years of age...as opposed to teenagers whose annoying high school librarians, who made their schools’ purchasing decisions, might object to a hell or damn, or the occasionally dark and gritty turn of plot.

Second, by earlier, I mean those prior to the groundbreaking Stranger in a Strange Land of 1961.  The later adult novels, after all, are much, much different animals.

Third, this section generally showcases book-length works each published in, well...a single book.  Many tales appeared first in the early pulps like Astounding, often across two or three issues—and those versions thus will appear in “Pulp Magazines”—while some, like The Puppet Masters, appeared first in the smaller postwar SF magazines, appearances which instead are featured in “Serializations.”  Here, therefore, we focus on the stand-alone adult books themselves.  For lack of a better place, however, I also have included the two Virginia Edition volumes on Heinlein’s screenwriting, since they were written with an adult audience in mind.

Finally, remember that books in the “juvenile,” or young-adult series, written for Scribner’s from 1947 through 1959 of course appear on their own page instead.  And speaking of the 1950s, by the way, notice here that at the same time Heinlein was writing one YA novel a year for Scribner’s, he also still was working in the occasional adult novel like The Puppet Masters, Double Star, and The Door into Summer—quite a versatile and prolific fellow.
For Us, The Living, 2003 (1938-1939)
This, Heinlein’s first attempted novel, actually had been lost to history for 60-odd years.  After being rediscovered by Heinlein scholar Robert James, it was published in 2003.
Orphans of the Sky, 1963 (1941)
For the earlier appearance of “Universe” with Hubert Rogers artwork in Astounding Science-Fiction in May 1941, and “Common Sense” in the October 1941 Astounding with Hubert Rogers cover art and Orban interiors, see my “Pulp Magazines” page.
Methuselah’s Children, 1958 (1941)
For the Hubert Rogers artwork for Methuselah’s Children when it was serialized in Astounding Science-Fiction in July, August, and September 1941, see “Pulp Magazines.”
Beyond This Horizon, 1948 (1942) 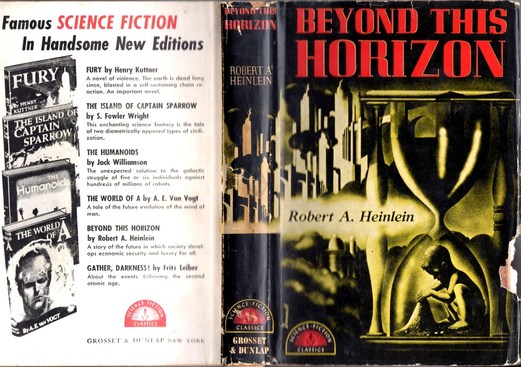 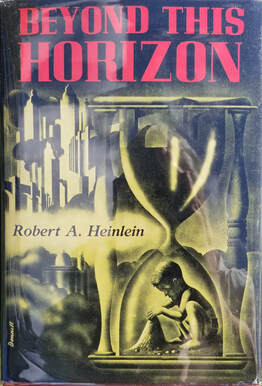 Cover art by A.J. Donnell (Not an original Fantasy Press 1948 but a First Edition Press printing from the 1990s) 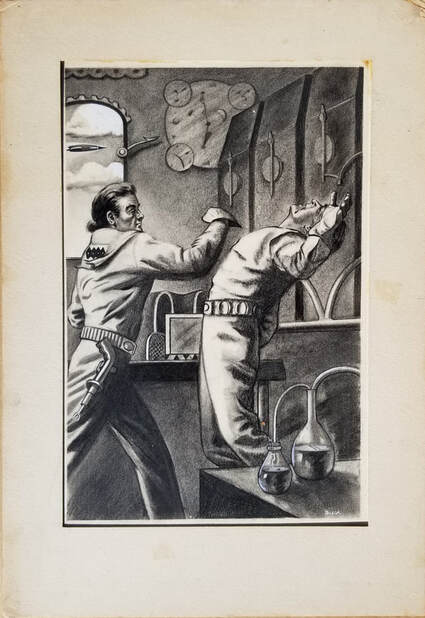 Here is the original charcoal by Robert Breck that was reproduced in the 1948 Fantasy Press hardcover edition, between pages 148 and 149. This was one of those serendipitous minor auction finds. The full board, matted over 70 years before my purchase, is 13.5 x 19.5 inches, with a picture of about 9.25 x 14.25 inches. 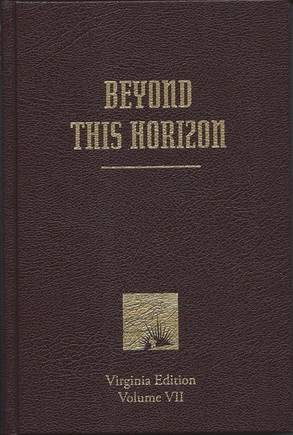 The Hubert Rogers art for Beyond This Horizon when it appeared in the huge Astounding Science-Fiction of April and May 1942 is at the “Pulp Magazines” page.
Waldo and Magic, Inc., 1950 (1940, 1942) 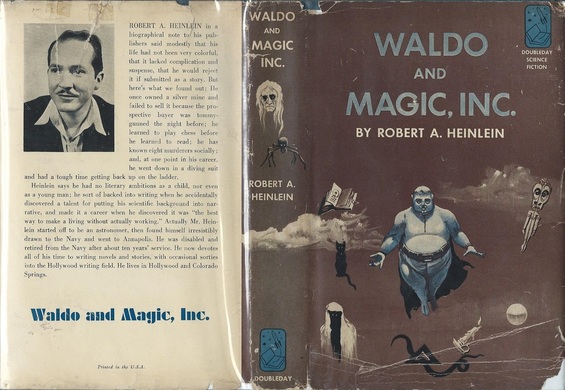 “Waldo” appeared first in the huge August 1942 Astounding Science-Fiction with cover art by Hubert Rogers and interiors by Orban, while “Magic, Inc.” was printed as “The Devil Makes the Law” in the September 1940 Unknown with interiors by Edd Cartier.  Both of course can be found at “Pulp Magazines.”
Sixth Column, 1949 (1941) 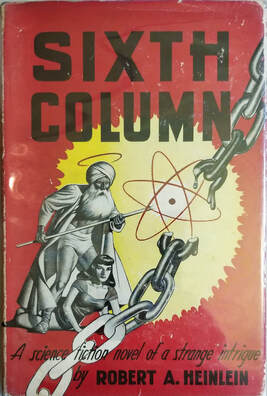 Cover art by Edd Cartier
Sixth Column first came out in January, February, and March 1941 in Astounding Science-Fiction.  To see the covers by Hubert Rogers and interiors by Schneeman, see my “Pulp Magazines” page. 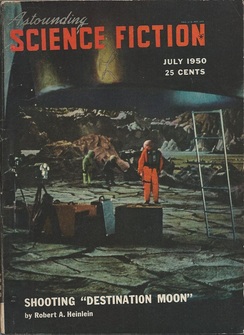 (The scan is not crooked—the cover and spine are.)
The Puppet Masters, 1951 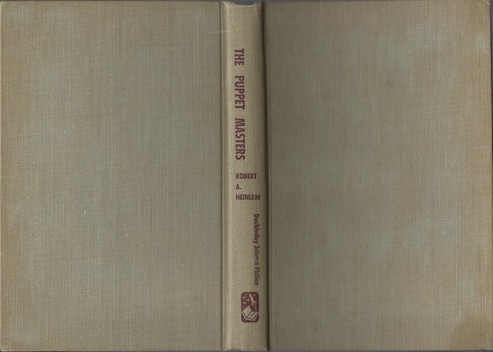 Not exactly a compelling cover—the dust jacket had disappeared long before I picked up this copy—but it definitely is a nice vintage copy. 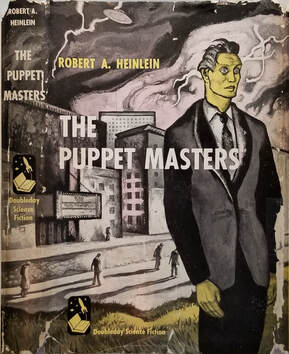 ...and, years later, here’s another copy, this time complete with that great creepy cover art! 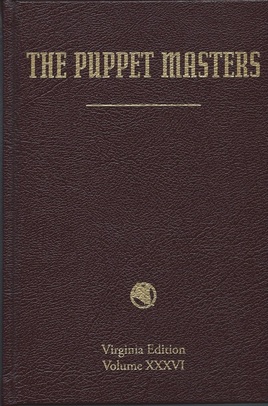 For some nifty covers and a pile of interiors by Don Sibley from the first release of ​The Puppet Masters in Galaxy in September, October, and November 1951, see my “Serializations” page.
​
Double Star, 1956
The Door into Summer, 1957 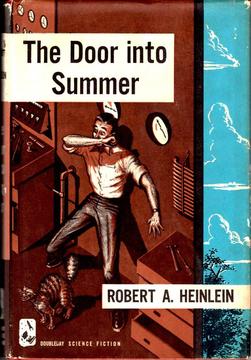